Technology is moving at such a relentless pace that it presents business leaders with a challenge, says Steven Perkins, global leader, technology, media and telecommunications. Do they embrace it as a source of endless opportunity, or view it suspiciously as a deeply disruptive influence and a risk to be managed?

Navigating so much change and uncertainty is a challenge that didn’t exist a few decades ago. Take a step back and look at the companies that have enjoyed significant market power over the past 100 years: the majority enjoyed decades of relative calm before being hit by 20-25 years of turbulence, much of it caused by information technology advances. The consequences affected corporate finances, damaged reputations and, in some cases, threatened entire business models. The outcome is that no organisation today can be certain its business model will be unaffected in the next 5 years.

Leveraging the power of technology

It can be tough to come to terms with such a landscape. Yet the results of the Grant Thornton’s International Business Report (IBR) – a quarterly survey of 2,500 businesses in 36 economies worldwide – suggest optimism is in greater supply than might be expected.

The results show that 68% of industry leaders see technology as an opportunity to be leveraged, with only 13% viewing it as a risk to be minimised.  As someone with 35 years of experience advising clients on the most effective use of IT across a wide range of industries, this is extremely encouraging. 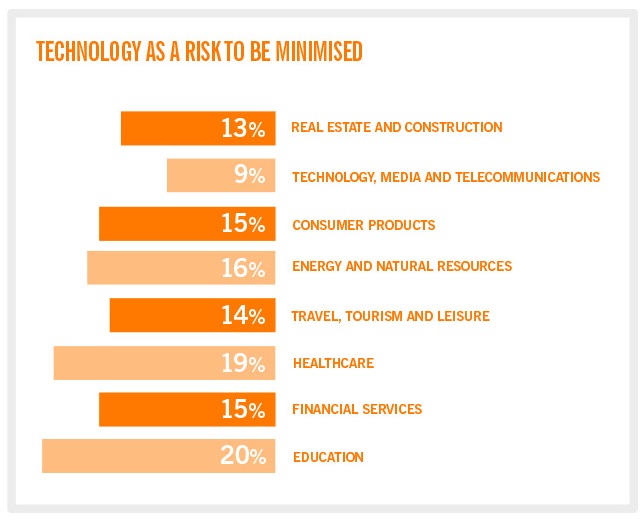 The IBR statistics confirm that technology is no longer largely a back-office function, it’s up front and centre. We’ve been through the initial shock of the disruption where the instinctive reaction is to see only risks to be managed. This happens in any industry that’s threatened. Yet we’re seeing the automotive industry embrace driverless cars aggressively and General Electric advertise itself as a digital company as it develops its own industrial Internet of Things.  The data suggests we’re through the early phase of shock and denial and technology is being accepted as the transformative agent we know it to be.

IBR data also shows that 70% of industry leaders believe technology will improve operational efficiency and reduce costs. This is related to new models of consuming technology, not least the ‘software as a service’ model, which has driven down the capital costs of acquiring technology to almost nothing.

Today, infrastructure requirements can be bought as a service or “rented”. As it’s an expense, as opposed to a capital item, there is a significant drop in acquisition price. The complexity is off your books, and you also have the flexibility to avoid a fixed long term of traditional outsourcing contracts. It’s a dramatic change.

This is further exemplified in the start-up and scaling of small technology companies. If someone invested $20m into a tech start-up in the past, a significant portion would go on acquiring the infrastructure just to be in business. Now, they write a monthly cheque.

A second wave of opportunity for technology

It’s possible to plot a timeline across industries. Technology moves from being firmly rooted in the back office, then it’s a disruptor, then it’s an opportunity.

If we look across the sectors, we are seeing opportunities for technology in construction and real estate. These are not digitally based industries, yet 68 per cent of respondents say it’s high on the boardroom agenda. It’s even more marked in travel tourism and leisure where the figure rises to 82%. This industry is in the earlier stages of being disrupted as can be shown by the success of the Airbnb model.

It’s also interesting that 81% of respondents in healthcare believe technology will increase efficiencies. Obviously, there’s some caution and you would expect significant risk concern in healthcare given that privacy and patient safety are paramount issues. Even so, it’s something they will have to face and some organisations will cope better than others.

Financial services, music publishing and retail have already made this journey. We’re now seeing a second wave that is affecting more traditional, more industrial, non-digitally intensive industries. I suspect the survivors of the process will be those who see technology firmly as an opportunity to be leveraged.

Click here to speak to Hanno Hepke or one of our specialist team about how to best harness technology for your organisation.